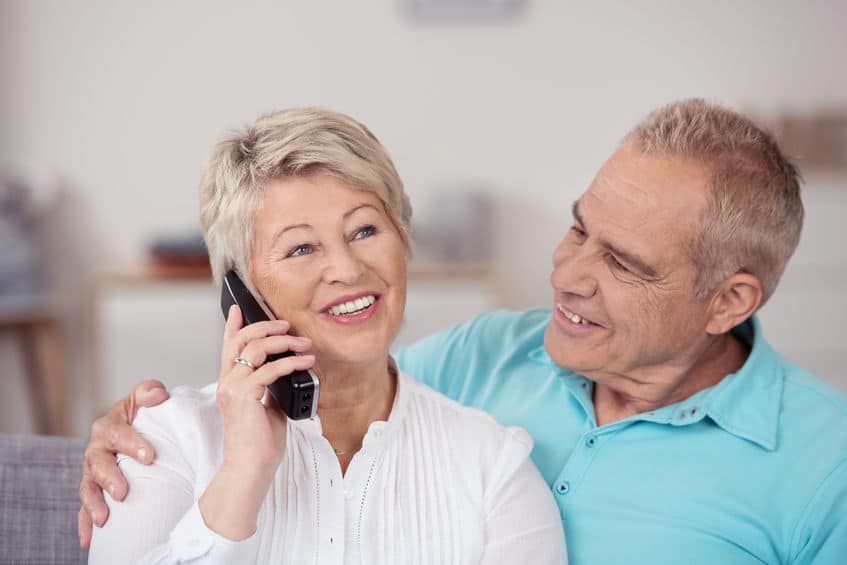 Find the perfect home phone for your loved one dealing with the effects of dementia or Alzheimer’s. These phones often have features like large buttons, picture dialing, hearing aid compatibility, and more to help them communicate with family easily.

Popular phones often frustrate seniors showing signs of dementia which can lead to numerous problems including increased stress and lack of communication with their family. Use this guide to answer questions about home telephones for people with dementia, to learn which features make a telephone dementia-friendly, and to review the benefits of providing a phone to a senior with dementia. Once you have read through this guide you will feel far more confident in selecting a telephone that is best suited to the needs of the senior in your life. By pairing a dementia-friendly phone with a dementia-focused phone service, we believe that most seniors with dementia can use a home telephone far along the dementia path, providing a critical communication tool for seniors to keep in touch with their family. That’s why we created this guide, to help you make the most informed and best decision possible for your unique situation. Navigate this document using the links below:  General Advice for Selecting a Dementia-Friendly Home Telephone Our research shows that keeping seniors with dementia connected with family and friends by telephone provides great benefits such as: Picking the best phone for dementia starts with understanding the unique needs of a loved-one and learning about suitable options. But it helps to keep in mind that a senior’s needs can change. A phone that works well today may become confusing or unusable over time as dementia progresses. Our recommendations can help caregivers keep a loved-one safely connected with family and friends by phone for as long as possible.. Each phone on our list has their own unique features and benefits to consider and was added to our list based on our own expert analysis and custom feedback on various phones and how they helped or hindered seniors with various problems or symptoms associated with dementia.

Telephones often frustrate people with age related problems like dementia. Our research shows that dementia phone problems tend to fall in common areas: Physical Challenges – Small buttons placed close together can make it difficult to dial. Hearing loss or hearing aids can render many phones unusable. Poor eyesight can make it hard to read some phone displays or tell the difference between different buttons. Complicated Features – Many popular phones are loaded with fancy features like address books, intercom, integrated answering machines and extra buttons for speed dialing. Such features often confuse seniors with dementia. Memory and other cognitive challenges – Names and numbers can become difficult to remember as Alzheimer’s or other dementias progress. This often makes it difficult for seniors to dial the person they want to speak with. Judgment and sense of time – Seniors with dementia often lose track of time and place calls which cause caregiver stress and anxiety. Some seniors develop disruptive habits like repeatedly calling family members many times in a day or in the middle of the night. Other seniors fall prey to phone scams or start calling 911 unnecessarily.   Many of these phone problems relate to the physical design of the telephone. However, some problems seen with dementia require more support than a phone can provide by itself. Hence for many seniors, picking a good telephone is necessary but not sufficient. Cognitive problems with memory, judgement and sense of time require a dementia focused service such as teleCalm. Click here to learn how teleCalm Caregiver phone service can solve common problems like repeat dialing, false 911 calling and phone scams.

Home phones have become complicated over the years. Many newer or fancier features make it more difficult for seniors with dementia or other cognitive challenges to use the telephone. Based on years of personal experience and customer feedback, we’ve found that the following key features are the most important to consider when shopping for a dementia-friendly home phone.

Photo Dial Mode – Photo dial mode makes it easy for seniors with memory challenges or physical challenges to dial family and friends with the touch of a single button.

At early stages of dementia, photo dialing can eliminate frustration from dialing by phone number. As dementia progresses, seniors can still often recognize familiar faces and call family members long after they forget names and numbers.
For many seniors with dementia, photo dial phones give an important sense of independence and dignity that would be impossible to achieve with traditional number dialing phones.

Large Buttons – Seniors can be frustrated by phone buttons which are too small or buttons which are placed too close together. Poor eyesight and shaky hands sometimes make it difficult to dial phone numbers correctly. The best dementia-friendly telephones have large buttons with these characteristics:

Simple Features – Caregivers tell us that simpler phones are better for seniors with dementia. Although common features like address books and intercom may appeal to people who rely on smart phones every day, such capabilities often confuse and frustrate seniors with dementia.
The best phones for dementia

T-coil Compatibility (hearing aids) – Look for T-coil compatibility if your loved one has trouble following phone conversations and has a T-coil enabled hearing aid or cochlear implant. T-coil systems solve hearing challenges by wirelessly coupling audio directly into a hearing aid or compatible receiver. T-coil technology can make it easier for seniors with compatible hearing aids to hear and understand telephone conversations, especially in noisy environments.

Common Questions About Home Phones for Dementia and Alzheimer’s

Our customers often ask us about the best telephones for dementia and tell us about their experiences. We’d like to help caregivers by sharing common questions and answers which our customers have found useful. Question 1: What makes a telephone dementia-friendly? Answer 1: Seniors with dementia often face a range of cognitive and physical challenges. It’s important to consider such challenges when comparing different phones. We list the most important phone features to consider above in the section Key Features of Dementia Friendly Home Phones. However, we also recommend choosing a teleCalm service plan to make a phone as dementia-friendly and caregiver-friendly as possible. Question 2: Should a senior with dementia even have a telephone? Answer 2: We believe that seniors with dementia should be able to have and use telephones. It’s a shame when caregivers feel forced to take away their loved one’s phone because of problems like repeated late-night dialing or false 911 calling. Research shows that social engagement with family and friends plays a key role in helping seniors with dementia or Alzheimer’s. Especially as mobility decreases, telephones give seniors with dementia an important tool to stay connected and maintain their independence and dignity. That’s why we created teleCalm – to help caregivers keep their loved ones connected with family and friends, to reduce senior isolation, and to reduce caregiver stress and elder fraud. Question 3: There are too many phone options. How can I choose the best home phone? Answer 3: Our caregiver customers often ask how to pick the best phone for their loved one. We find that a senior’s particular situation quickly suggests one or two phones over the others. For example, we recommend the Future Call FC-1007SP as the best photo dial phone for people who can only dial by photos. But we recommend the Serene Innovations HD40P for those who want to dial by number and as well as dial by phone. Call us at 1-888-701-0411 and we’ll be happy help pick the best options. Question 4: What benefits does teleCalm service add to dementia-friendly home phones? Answer 4: teleCalm service solves problems which physical phones cannot solve by themselves. For example, teleCalm helps manage dementia related problems such as repeat dialing, late night dialing and false 911 dialing. teleCalm’s patented service allows caregivers to personalize service settings according to their loved-ones needs, even when the caregiver and senior live in different cities or states. Caregivers can also use teleCalm service to receive notifications when their loved-one places emergency calls or starts compulsive repeat dialing. To summarize, teleCalm service helps caregivers help their loved-one with dementia or Alzheimer’s. Click here to learn how teleCalm Caregiver phone service can stop problem calls yet keep a loved-one safely connected by phone. Question 5: What’s the best phone for a loved one with Dementia or Alzheimer’s? Answer 5: We’ve found that one size does not fit all. Although caregivers often face common problems, there is no single phone that works best for all situations. However, our customers give high marks to the following 3 step process to pick the best phone for a senior with dementia

Our customer favorite for dementia, Alzheimer’s and memory care is the Future Call Picture Care Phone. We use two different models extensively at teleCalm; the FC-1007SP with speakerphone and the FC-1007 without speakerphone.

These phones incorporate extra-large number buttons that can also hold a photo of family or friends, so your loved one can simply pick up the phone and press a photo to dial. Photo dialing eliminates the frustration of wrong number dialing and having to remember all 10 digits. There is also a red 911 speed dial button on the top. This 911 button is also programmable, which is perfect for Memory Care where 24-hour help is available right down the hall. There is a convenient volume control that provides over 40dB amplification in the handset. These phones are easy to program and easy to personalize with photos. They do not require any batteries or an external power source. All power comes from the phone line itself.

The FC-1007SP is a perfect complement to our Caregiver℠ phone service. This unique service helps caregivers and families cope with repeat dialing, late-night calls, and inappropriate 911 dialing. It also stops all robocalls, telemarketers and scammers.

Why Choose The Future Call FC-1007SP

Why We Recommend This Phone

Why Choose The Serene Innovations HD40P

Why We Recommended This Phone

Why Choose The Panasonic KX-TGM420W

Why We Recommended This Phone

Why Choose The No Dial Telephone Why We Recommended This Phone Key Features Price: Less than $50 USD

How and why did we pick the phones for this list? At teleCalm, our only mission is to serve seniors with Alzheimer’s or other dementias and their caregivers. We do this by providing a phone service specifically made to help those dealing with the symptoms of dementia and their caretakers cope without cutting your loved ones off from their home phone service. Not only do we provide a phone service for dementia but our team also, researches the various problems caused by dementia, analyzes feedback from caretakers about how phones and our service worked in helping alleviate issues caused by dementia, and we’re always reviewing new products and equipment aimed at helping seniors with dementia. We took all of this together and used it to make the list of phones you see above. With so many telephone options on the market, we want to make it easy for caregivers to make the best, most informed decision possible. To do this we complied this short list of top phones based on these sources of data and factors: